Ruminating in various types of anxiety 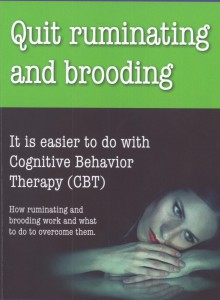 Nearly every human being has been ruminating. The everyday ruminating that we do does not distinguish itself in terms of characteristics from the ruminating and brooding that are parts of a more serious state of anxiety. The difference is that everyday rumination is not as persistent and longstanding, and it is not as painful. There are a few anxiety disorders that are known to be characterized by persistent rumination and brooding. The most common ones are Obsessive Compulsive Disorder, jealousy, hypochondria, Social Anxiety Disorder, and generalized anxiety disorder.

In cases of these anxiety disorders, ruminating is a major part of the problem. In some cases it is the dominant and most painful behavior for the patient. Ruminating is often a way to convince oneself, to calm oneself, to experience clarity and assurance and to finally feel better.

We have gotten our thinking ability, for better and worse. When humankind lived in forests where wild animals were a constant threat, it was advantageous for our survival to be able to recognize dangers before they became real or close. It was important to have the imagination to visualize a bear behind a big rock, and accordingly to take a detour in order to have a head start, and get away from the bear. It was important to realize dangers ahead of time in order to be able to avoid them.

People who had a vivid imagination and the ability to foresee and imagine dangers before they were apparent and real, had better chances for survival. As long as there was a realization that a situation might be dangerous, there was a possibility to devise protective measures and strategies. Awareness and the ability to imagine dangers made it possible to make use of safety behavior. The ability to conceive of and to predict dangers can be seen as a life-saving cognitive activity in Stone Age humans. Early humankind needed ruminating for its survival. The need for this type of cognitive activity is not as necessary in our times.

We are now living in a world where ruminating is not life-saving in the same way. Our brains, that have evolved to become imaginative, will accordingly make us see dangers that do not exist in our relatively harmless world. We are afflicted by unnecessary, discomforting thoughts that warn us of dangers that are not real dangers. However, since we are in completely different contexts than Stone Age humans, our brains come up with completely different dangers.

We worry about if we will not get the job we applied for, and if we don’t, what will we do? We ponder over what our work colleagues say about us and what we can do to find out, and eventually change what they say. Our thoughts are occupied with what we should do if our washing-machine breaks down, since we do not have enough money to instantly replace it with a new one. We can even ponder over if what we said to Lisa made her sad, and what we in that case can say to her to make her happy. We brood on whether or not there is a life after this one, and if we are living our lives the way we were supposed to. We ponder over the big questions of life, is there a God? what is the meaning of life?

Our ruminations occur in different situations, and often in connection to feelings of worry and anxiety. Ruminations can have different names, depending on the context in which they appear. Sometimes they are referred to as guilty conscience, sometimes as anticipatory anxiety, decision-anxiety in other contexts, and with a different content they can be referred to as religious broodings or a crisis of life. It is the same type of activity going on in our brains, only the content of our thoughts varies. The function of this thinking is always the same, as we try to solve problems with our cognitive behavior. Sometimes the problems are impossible to solve, or they can only be solved through exterior behaviors. But often, ruminating is about trying to solve unsolvable problems in our minds.

Ruminations are thoughts. Thoughts are a type of behavior, so called cognitive behavior. Other types of behavior are motor or external behaviors. These behaviors are what we do with our bodies and which are usually visible, while cognitive behaviors occur inside of us and are not directly observable. Autonomous behavior differs from the external/motor behavior in that it cannot be controlled by will, and it is run by an independent nervous system – the autonomous nervous system. Autonomous behavior includes things that happen in our bodies, often without us knowing about them, for example, our heart beat, our blood vessels expanding, sweating, our stomachs processing food and our intestines absorbing nourishment etc. Autonomous behavior includes what happens in our body when we get angry, scared, or excited.

Apart from humans, no other living creature has the ability to think about things in ways that lead to ruminations and brooding. Ruminations are probably the psychological “scourge” that most people suffer from. Not just patients who seek help for it, but all of us. Anyone can sometimes be afflicted by ruminating about things that nothing can be done about.  We are tormented by ruminations when we lie sleepless at night, we are tormented by them when we are alone, or whenever we have parts of our thinking free for use. We are tormented by them for hours, days, and even years, now and then during our entire lives.