A book on ruminations – Why? 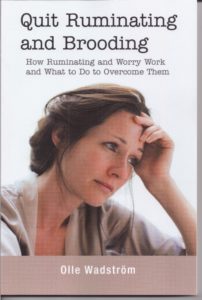 To my knowledge, there have been no previous behavioral analyses of rumination and brooding which have resulted in a conscious and clearly described strategy for treatment. I have taken the challenge to explain what keeps ruminating going, despite the fact that people claim that ruminating makes them feel bad, and that they want to be rid of it.

I have tested the methodology which was the result of my analysis on both my own patients as well as on my friends who had everyday ruminations. They claim that it has been helpful. They have also stated that the analysis makes ruminating more understandable, and that they can now understand why they have not been able to give it up earlier. The method which I suggest is not a new one, but rather an application of well-proven behavior therapy methods with scientific support. The exciting part is the application to ruminating – a cognitive (thought-) behavior.

My hopes are that this book will be able to help everyone who is ruminating and brooding to rid themselves of this self-torture. I have aimed at making this book simple and straight forward, so that it can be read and understood by the general public, but I hope that behavior therapists (Cognitive behavior therapists) and other therapists will embrace it as well. The content is wholly based on behavior analysis and principles of learning-psychology.